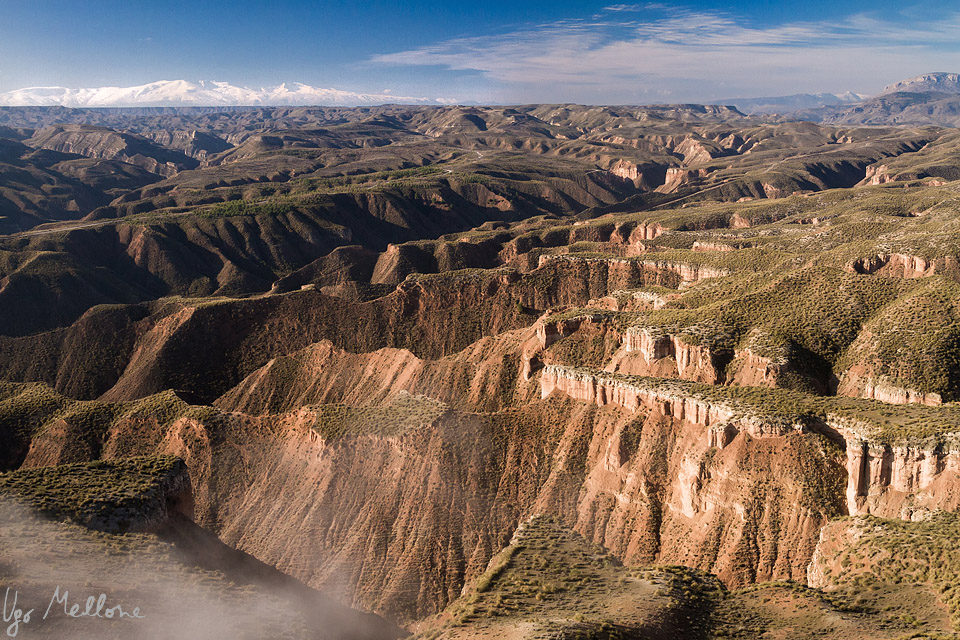 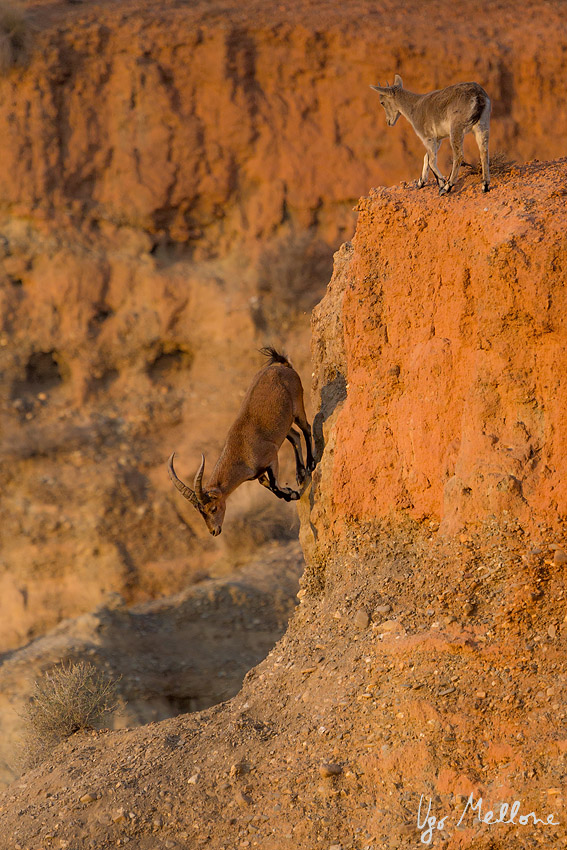 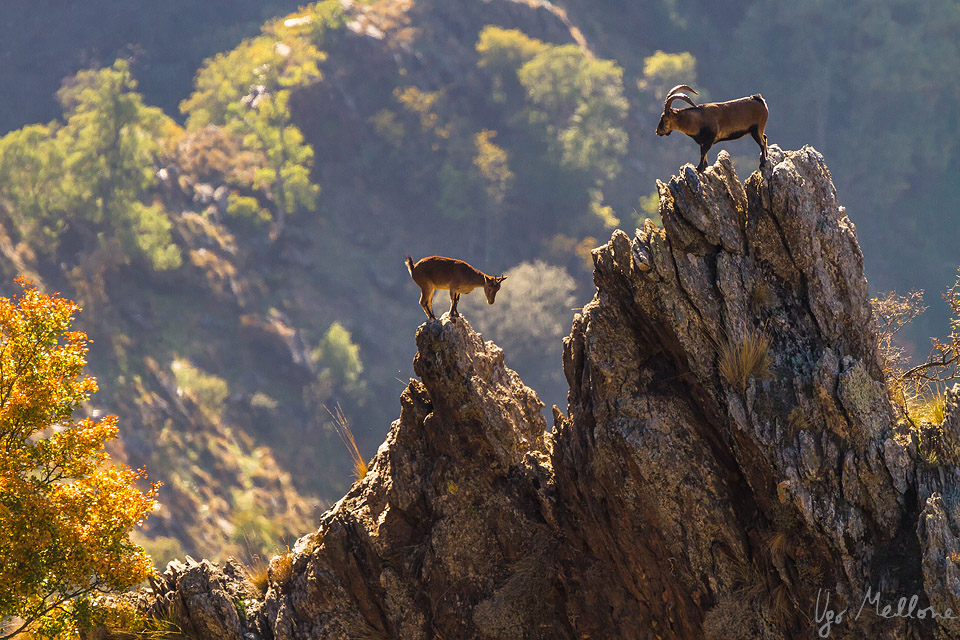 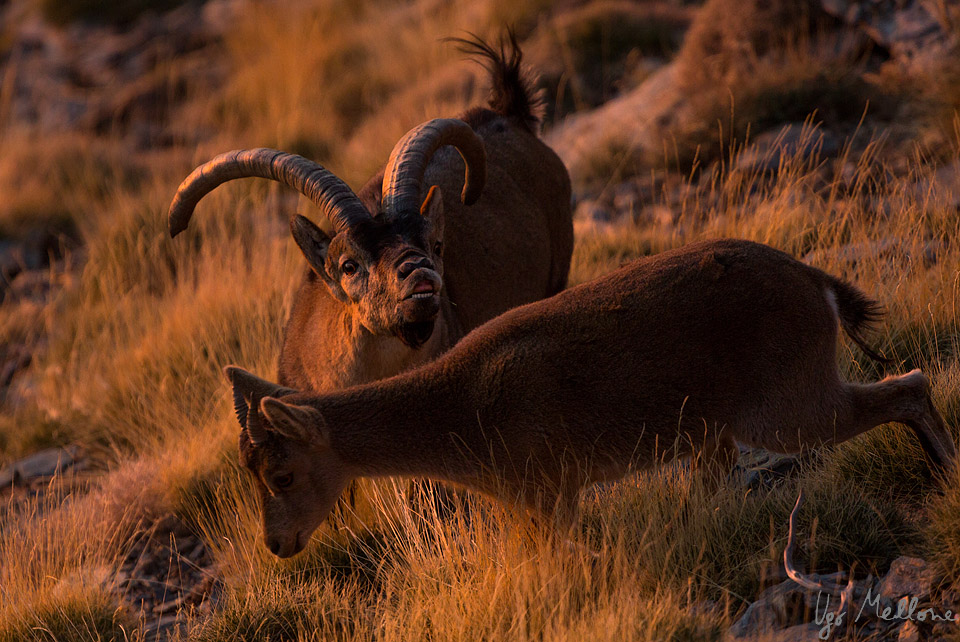 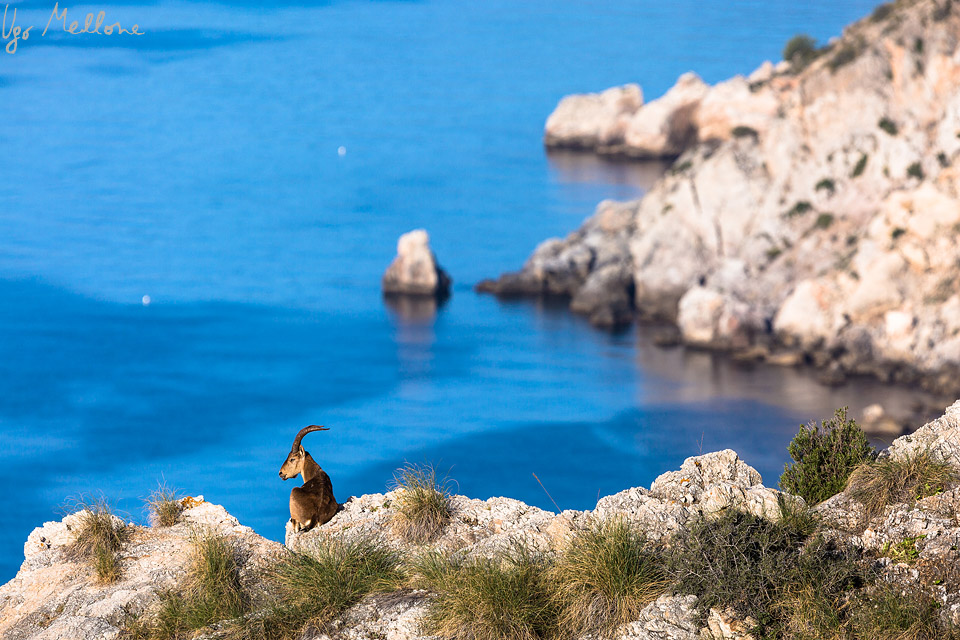 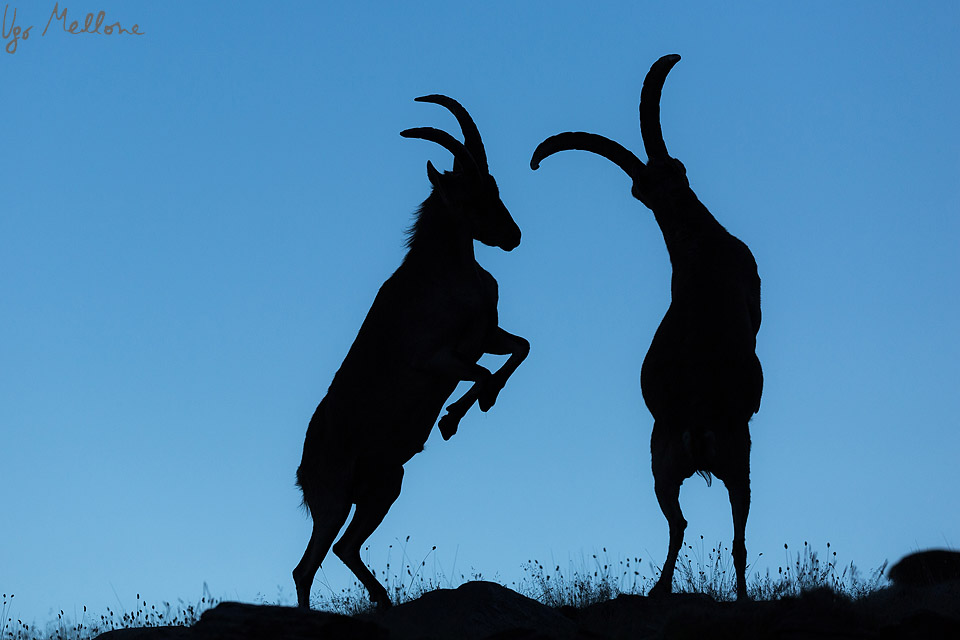 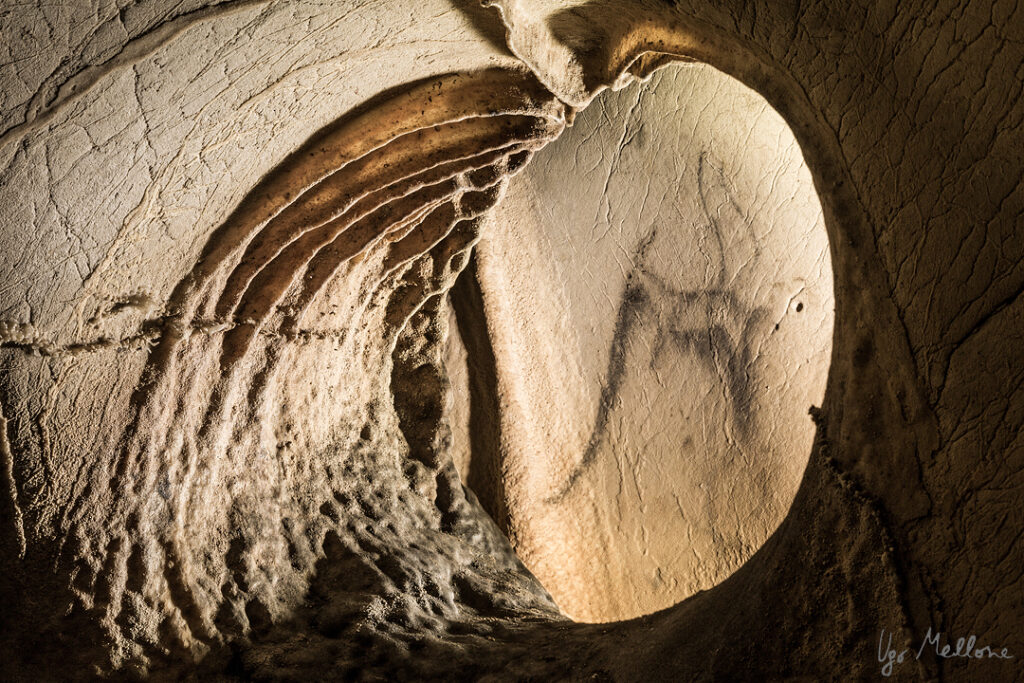 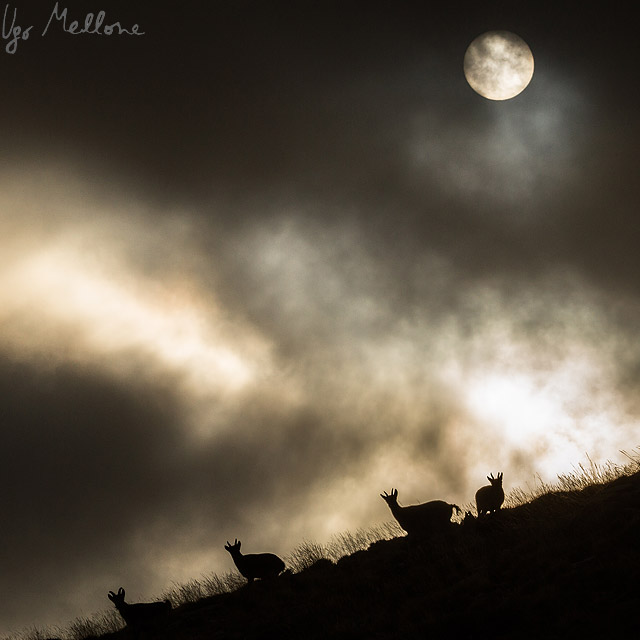 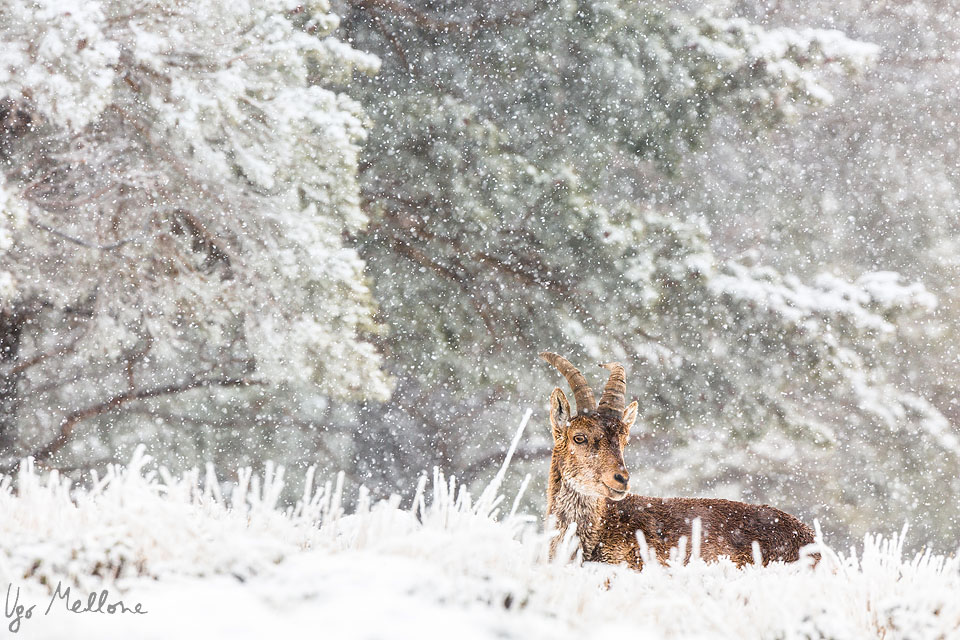 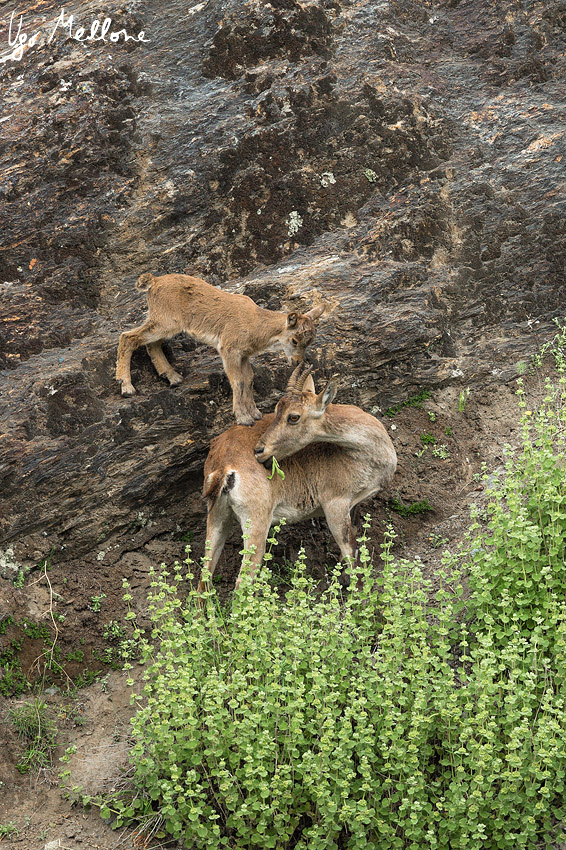 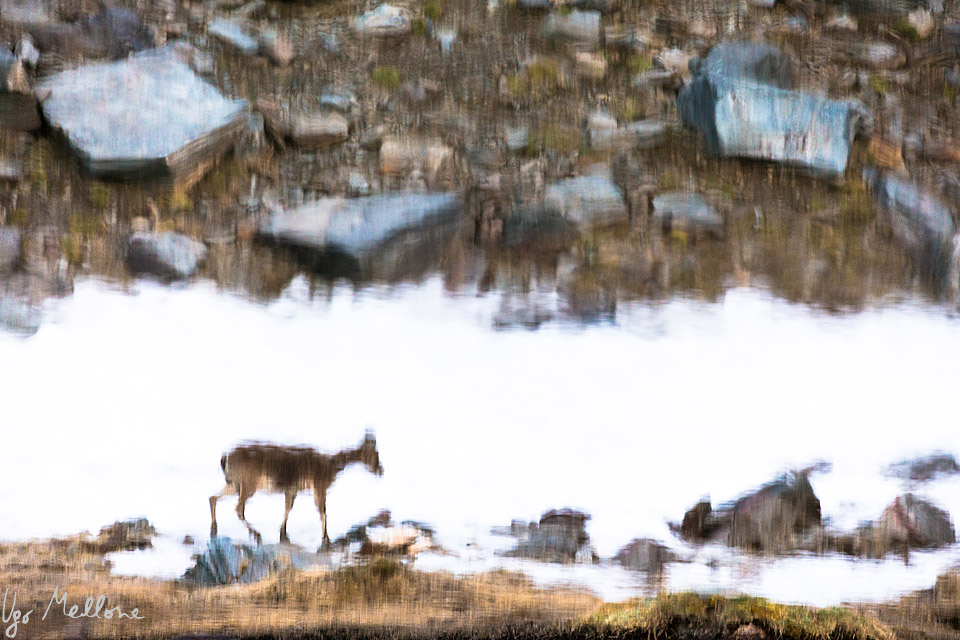 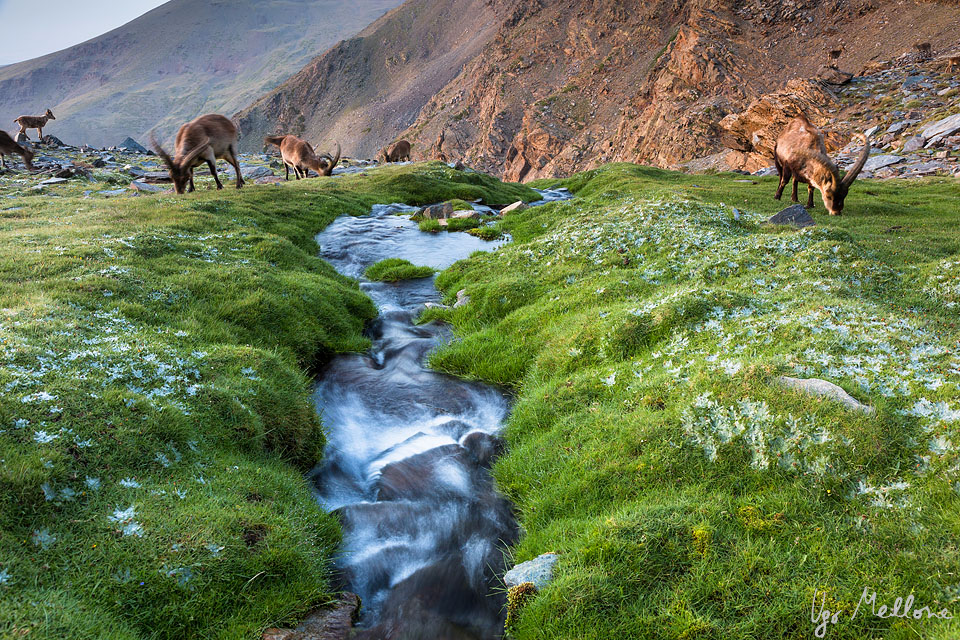 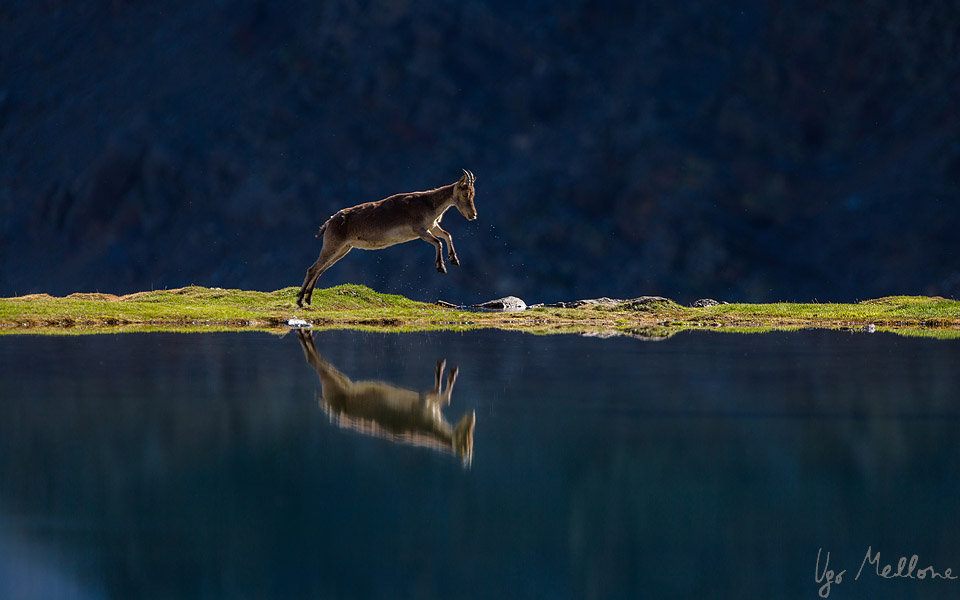 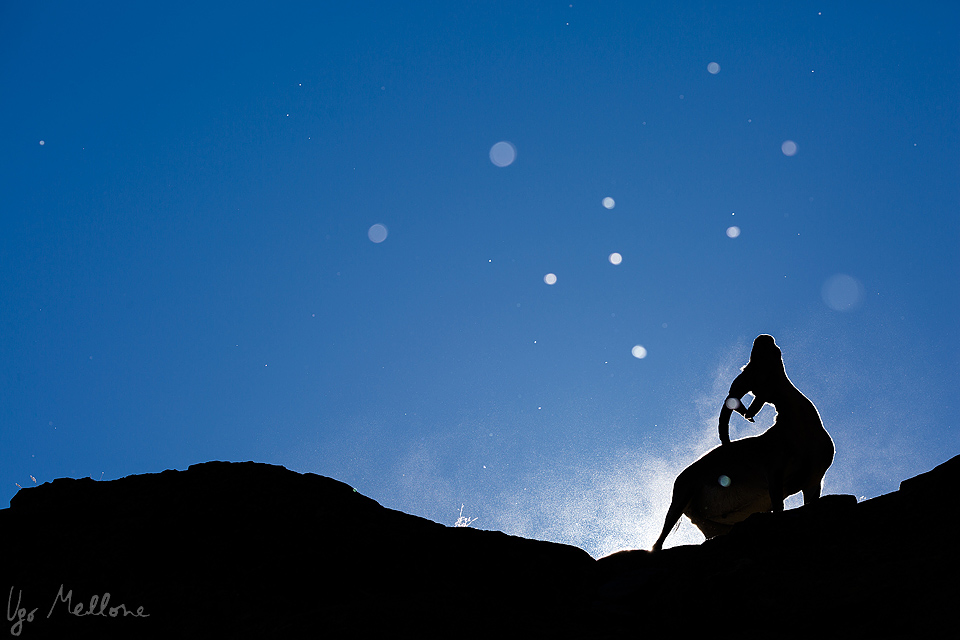 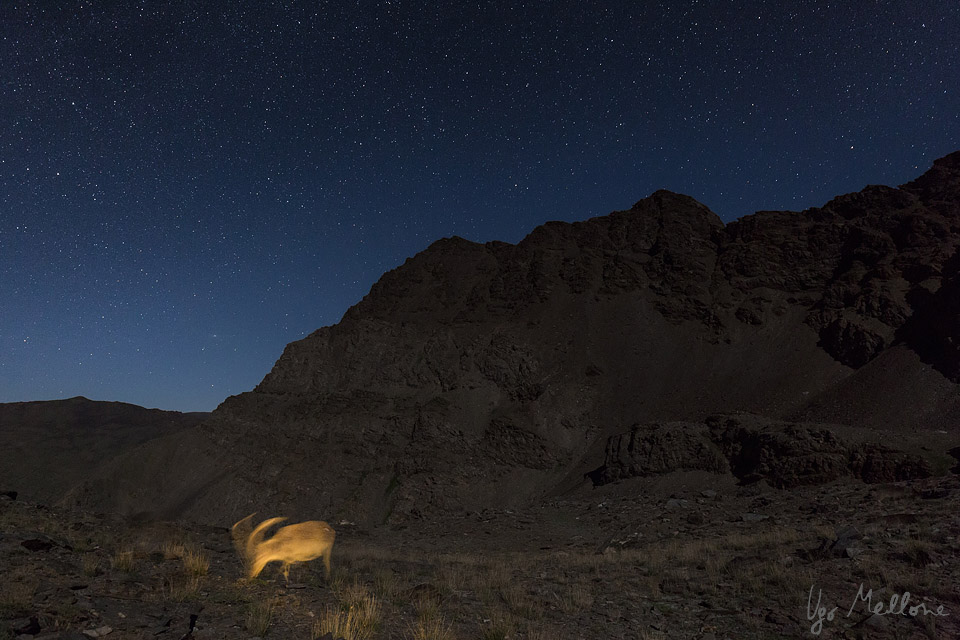 The badlands of the Guadix depression, dominated, in the background, by the Sierra Nevada.

During the rut, males, going after females, can reach quite unlikely positions. Here, a female and a male within the autumn landscape of the northern slopes of Sierra Nevada.

During the rut the males stimulate females to urinate in order to evaluate their sexual receptivity: they assume an odd appearance, stretching their necks, ears ahead and erecting their tails in order to diffuse the pheromones more. In this picture, a male curling back his lips in order to facilitate the capture of smells. This position is known as the flehmen response.

A male enjoying the view from a cliff on the Mediterranean coast.

Fights among the males may occur throughout the year

Through a window: the Iberian ibex is one of the most represented species among the rock art of the Cueva de la Pileta, drawn some 10.000 years ago.

During an autumn afternoon, different layers of clouds interpose between the mountains and the sun, hiding or highlighting it, according to their whims

Male during a snowfall. During winter the high altitude areas become a totally unsuitable habitat for the ibex, which in this season do not usually overcome the altitude of 2,400 metres

During the first weeks the kids stay close to their mothers, as they have to dwell on the steep slopes

Towards the end of spring, when the snow melt is almost over, females are the first ibexes to reach the high mountain meadows, around the lakes.

When the snow melting is over and the "borreguiles" (wet meadows) are at their peak, groups of males reach these areas. These spots are like oasis in the rocky landscape of screes and cliffs that characterize the highest areas of the mountain. Pale leaves on the ground belong to Plantago nivalis, an endemism of Sierra Nevada

Female running at sunrise beside a lake

A male ibex shaking off the dust and scratching, behind a cloud of gnats.

During the summer, ibex continue to graze during night.

The Iberian ibex is an endemic mammal of the Iberian peninsula. While it disappeared from several areas, including the Pyrenees, in Andalusia it is still quite widespread. For three years I photographed them in the province of Granada, from sea level up to more than 3,000 metres, throughout the seasons.  This animal shows its flexibility living among so different ecosystems, such as coastal cliffs, deserts, or the massive northern slopes of the high peaks of the Sierra Nevada. Different landscapes, all sharing a vertical soul, which transforms them into stages where the ibexes become real acrobats, challenging the force of gravity, with their hooves providing 16 independent support points. The Iberian ibex is the subject of my first book.